If I Am Your Mirror

A Civil War veteran (played by Larry Holden, Batman Begins, Memento) has some grim PTSD in this rotoscopically animated horror short inspired by the works of Edgar Allen Poe.

See the Trailer, watch a short Behind the scenes teaser, or see the entire film on Vimeo.

I'm the "Imp" prisoner in this adaptation of Poe's short 'narrator' stories like The Tell-Tale Heart. My lines are those of the narrator in The Imp of the Perverse, "I am safe. Yes, safe" etc. A stand-alone film, this short will also be used to secure funding for a feature film that will combine several of Poe's stories that feature a narrator. This was shot on a blue screen in HDV (F 900) and the footage run through an intensive post-production process, the goal being something that "looks like a dark Romantic painting come to life," a realist depiction of the story as it might have evolved in Poe’s dark imagination. The effect reminds me of the Robin William's film What Dreams May Come. 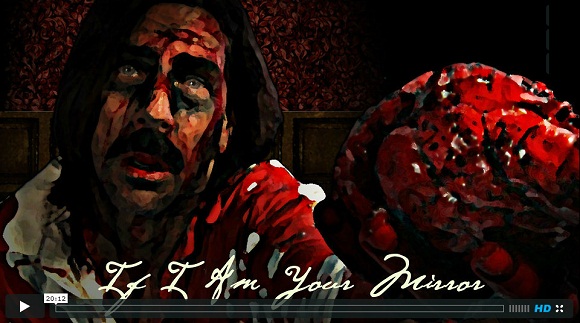 This short film started with the working title of 'A Tell Tale Heart' and the goal of using is a fund raising tool for an untitled feature-length project that will depict five of Poe’s stories.

Synopsis: Set on a foggy night in a Richmond, Virginia jail cell in the middle of 19th century--the time and location where Poe did most of his best work. Jailed in the cell, the viewer will find five of Poe’s characters from five favorite stories:

all of whom await their deaths by hanging at dawn. The gallows from which they will hang wait in a courtyard just outside the jail, visible through the jail cell window. In the initial scene of the film, Edgar Allen Poe himself is led into the cell, having been arrested for public drunkenness. It’s during his time in the shared, dingy cell, that he hears each of the characters tell their tales. The narrators’ monologs will be directly derived from Poe’s texts insomuch as they will set the tone for the story.

The film is dedicated to Larry Holden (Batman Begins, Insomnia, Memento), the lead who died February 2011, just weeks before the movie premiered at the Plaza Theater in Atlanta.

New Lexicon Productions won the 'Best Use of Character' award in the 2009 Atlanta 48-hour Film Festival.