Too Old (To Act With Kids)

"Too Old For Kids" set

Here's a clip from a set I performed at Relapse Theatre on March 6th, 2010. It's an exhausting rant: the persona is hard to snap out of and not nearly as cathartic a set as I hoped! There's a video of the full set below the clips. I will be doing a variation on the set on May 27th for an improv-monster) show themed 'Too Damn Old."


The video below has clips from all the comics that night:

Wow, this cabaret is a great place for an act to perform; bright graffiti on the walls, urban night-life vibe, and a young hip crowd...

of course, I am WAY too old for this shit.

In case you didn’t know, I am the Old Man in tonight’s lineup. I suspect that’s the reason it is at eight o’clock: they didn’t want to keep me up past my bedtime.

I see there are a lot of actors and improvisers tonight. Just listen to that energy! Well, god bless you.

I recently made a career change to be an actor but, at my age, it can be frustrating. I’m constantly surrounded by plucky, energetic people and their unbridled enthusiasm. And these kids are so hopeful, so optimistic.

Frankly, optimism makes me uncomfortable. My comfort zone is cynical self-loathing. I guess that’s why I’m giving standup a shot. 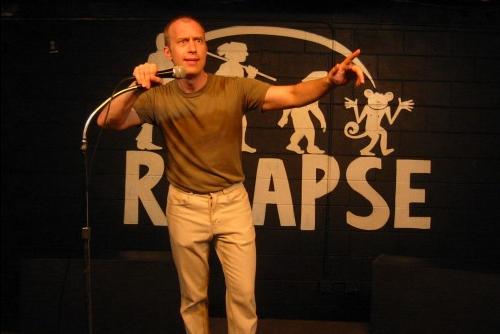 So I find it hard being an older actor among so many young people. After a show the kids hang around to savor the congratulations from the crowd; I have to explain, and justify, why my improv references were not too old, not too obscure. We do a show and at intermission the kids are smoking, and bouncing of the walls, and bubbling over, thrilled to be performing; I’m in the green room taking a nap. After a show they gleefully chatter about which bar to go to; I’m checking my meds for complications with alcohol.

Well, these kids may have twice my energy, but at least I have three times their income. You see, before becoming an actor I socked away some money while working another career ― or what my mother still calls my real job. You know, a profession like engineer, doctor, lawyer: a job that requires you actually know something.

Everyone knows it’s hard to make a living as an actor, yet these kids are so optimistic. A doey-eyed actor gets a cheesy part on a shitty little public access channel TV program or QVC commercial and they think “I’m making a living as an Actor!”

Yeah, right. They made a paycheck as an actor. They’re making a living as a waiter. They can fantasize all they want on that Dream acting gig, just remember, kid, you’re still earning more now, busing tables.

Your acting revenues will pale against tip money from your gig at KFC. I mean, most actors I know are as likely to earn a living acting as that to buy their own cigarettes... or their own drinks at the bar for that matter.

Now that I am an Actor my social circle has really changed to the under and unemployed. And my well-off “colleagues” either make their living sucking money from their parents or cashing unemployment checks. Meanwhile I find our my old skills—all those “professional” skills ― they aren’t important to being an actor, like working during the day, or waking up before noon, or buying health insurance. I guess those are only things you do when you earn your own living.


“I can make a living acting!”
“I get to express myself; explore my feelings”.
“Meisner was a genius; Stanislavski is a God.”


Hey, if you don’t know those names, don’t worry ― no one else does either!

Nor do they CARE!

What sounds so passionate and enduring to a 20-something makes this 40-something want to throw up. Most these kids have obvious, obvious, border line personality disorders. You are friggin’ kidding yourself if you think your hippie emotional instability is your gateway to a career. What I’ve learned is the only gateway the theatre will give these kids is a gateway to stronger drugs.

Yet, oh, they have so much energy, and so much passion. A performance ends at 11 pm and “let’s all go out” and drink until the bars close down. Then lets hang out in a parking lot ― because I made the mistake of being the designated driver ― until 5 fucking AM ― while they gossip about who is sleeping with whom ― which really pisses me off because 1) it is s 20 degrees out and 2) I’ve been up for 22 hours and 3) I haven’t been able to hook up with anyone because, like I said, I am twice the age of everyone here so I’m the creepy old guy --- damn it, I don’t spend money on drugs which I actually can afford to ― but it’s cold and why can’t we go home and the next night I do the same damn thing with the same damn people because I’m too old too learn shit like making the same mistake... and... and it is fucking killing me.

So now it’s 5 or 6 in the morning and the party goers finally decide to go home ― to my home ― because I actually own a house instead of renting some run-down efficiency, and I made the fucking mistake of taking as my roommate an Actor and ― get this, he’s also a stand-up comic ― my second stand-up roommate actually ― because, like I said, I am too old to learn from my mistakes ― and my roommate, well he hooks up with three girls on a regular basis. A regular basis!

Tiffany, Channel, Mindy, Cindy, Bubbles, whatever the fuck is their names. I know he is getting off more times a week than I have had dates in the last year.

And that brings out this petty, competitive, instinct in me. I can deal with his idealist dream of being an actor, I know that crap will never happen, but I’ll be damn if some kid, under my roof, is going to get off more often than me. I have to maintain cred in my own house if only for my own self esteem. So I’ve gone from beating off a couple times a week to several times a day to keep up with a 20-something punk and... and... it is fucking killing me.

Why can’t I find a cute, down-on-their luck lolito who needs to compromise their morals to make up for their poor acting livelihood?

There you go: you really can make a living acting!

GOD, I am not fit to be around kids.

And I need a nap.