Open since 1947, and initially lead by Atlanta's theater matriarch Mary Nell Santacroce, Drama Tech is Atlanta's oldest continously running theatre. The troupe's longest tenure was a 24-year residence (1968 to 1992) in a former church on the corner of Ferst Drive at Hemphill Ave, on the Georgia Tech Campus. For almost as long, Drama Tech was headed by Director and Georgia Tech instructor, Greg Abbott, from 1984 until his untimely death in 2006.

I got to perform in 17 main stage Drama Tech shows while a student at Georgia Tech, including plays in each of the first 3 International Theatre Festivals.

By 1993, there was only one other guy who had racked up more roles at the theatre. That held until 2009 when another plucky student beat my tally, dropping me to a tie for 3rd place in the Top Ten Cast List of most frequent actors. Curses!

Assassins by Stephen Sondheim
Voice Of The Prairie by Clive Olive
A Midsummer Night’s Dream by Wm. Shakespeare
Funny Forum by Stephen Sondheim
Illusion by Tony Kushner
God by Woody Allen
Women In Congress by Aristophenes
Man Of La Mancha by Wasserman et. al.
A Pickwick Christmas Carol by Greg Abbott
Fahrenheit 451
Pippin by Hirson
Memorandum by Václáv Hável
Peachtree Haunting
How The Other Half Loves by Alan Ayckbourn
Exit The Body by Fred Carmichael
Dark Of The Moon by Richardson & Berney
15 Minute Hamlet by Tom Stoppard
Tartuffe by Moliére

After a long residence in the church, Drama Tech moved into a brand new black box theater in the Ferst Center for the Arts. I got to play there in their inaugural season with Voice Of The Prairie and Assassins and, much later, in several of the annual Black Box Improv & Comedy festivals (2005, 2006, 2008, 2009, and 2010). By 2017, DT had been in this "new" space longer than even the old Hemphill church. 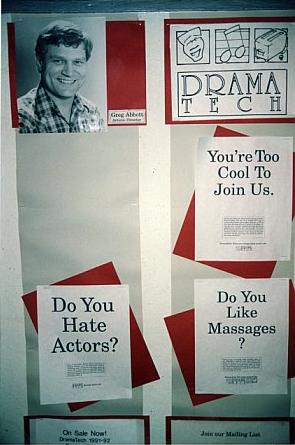